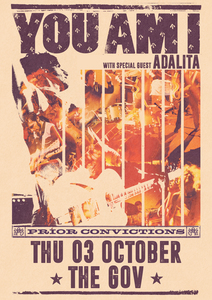 Ahead of their forthcoming European tour, You Am I have announced they will be performing a special 1 off show this coming September at The Gov in Adelaide.

To coincide with the shows, You Am I will be releasing their seventh studio album ‘Convicts’ for the first time on 180 gram vinyl, and to celebrate the release the band will be playing its tunes and much much more at these shows.

‘The recording of the LP Convicts found our band at an odd juncture. The 8th such juncture of the 19 we’ve found ourselves at. So far. And whaddya do when you find yerselves at a juncture? You hitch yerself to the fastest hunk o’ junk outta there. Stuck ourselves in a room and wrestled with some toons like kids on detention at the Potter’s Wheel. We listened back lately; we like it. So, we’re releasing it on LP for the first time, and playing some shows. Because we like it.
First at a couple of venues we have history with, then we’ll go be Convicts in Europe.’